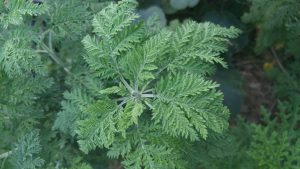 The genus Artemisia was named in honour of the Greek/Persian Queen Artemisia who was a botanist and medical researcher. There are over 200 different plants that are comprised within this genus.  Wormwood is a native of Asia and Europe, but has since naturalised in warmer regions around the world.

Prized for being one of the most bitter herbs, it is an important component in aperitifs and herb wines. Absinthe and vermouth are some of most notable examples. In addition, wormwood was strung about the house to deter fleas, sliver fish, mice and evil spirits.

It was especially important during times of great plagues when it was used as a snuff, worn on the body, and hung to fumigate rooms.

Infusion: A cup of wormwood tea is used for an upset stomach or premenstrual pain. Place 1 teaspoon of dried herb to one cup of boiling water infused 10 minutes and take 3 times a day before meals. **

**Cautions. Do not used wormwood for a period longer than 3-4 weeks at a time, nor use to great of a dosage as thujone in wormwood can damage the central nervous system and lead to stomach cramps, nausea, dizziness, seizures, and insomnia. Never take wormwood if pregnant because it can bring on uterine contractions.

Culinary: Used to flavor wines like Vermouth and Absinthe, a popular alcoholic drink in Europe at the beginning of the 20th century.

Additional Uses: A wormword infusion can be sprayed in the garden to rid of aphids, fleas, moths, flies, snails and slugs. It can also produce a yellow dye.