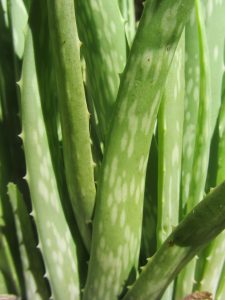 There are over 300 different species of this half-hardy succulent perennial that have adapted to frost-free regions around the world though native to tropical Africa and the Mediterrean. Aloe vera has been long valued by various cultures since at least the fourth century BC when Alexander the Great conquered Socotra in order to collect aloe plants to use as medicine for his wounded soldiers. The Egyptians first wrote of the healing properties of aloe on papyrus texts noting it as a “plant of immortality”.  Nefertit and Cleopatra even indulged in aloe juice baths to maintain their youthful skin and beauty. The Greeks and Romans used the gel from aloe on wounds and it is recorded in Pliny to rub aloe leaves on “ulcerated male genitals”.

During the Middle Ages, it was commonly used as a purgative. China used aloe for similar reasons, and India treasured it as an effective cooling tonic. By the 16th century, aloe had reached the West Indies where it became widely cultivated.

Fresh: Split the outer barrier of the leaves to obtain the inner gel; the gel is applied externally to wounds to form a clear protective barrier and encourages healing of the skin. Apply gel for minor cuts, burns, sunburns, fungal infections such a ring worm, dry skin, eczema especially around the eyes, and insect bites; it encourages skin regeneration while providing instant soothing. In Ayurveda, the gel is used as a tonic for a person with excess pitta.

Tonic Wine: Used for anemia, poor digestive function, and liver disorders. Fermented aloe gel with spices and honey is used in India and known as kumaryasava. Blend or mince 300g of leaves, add 500g honey and 750ml of red wine. Put mixture in dark bottle and keep in the refrigerator. Take 50 ml daily, 30 minutes before every meal.

Tincture: To stimulate appetite or for constipation. Use 1-3 ml per dose.

Powder: Used as a purgative for constipation or to stimulate bile flow. Take 100-500 mg per dose or in capsules.

Culinary:  May be used in drinks by blending the gel from the leaves or stabilizing the aloe juice by adding vitamin C powder.* Mix gel into soups, gravies, dips and dressings.

*Avoid in pregnancy as the anthraquinone glycosides are strongly purgative. High doses of the leaves cause vomiting.