Brandon Raynor has been treating clients through massage and Naturopathy since he qualified in 1991. He has also done extensive studies into meditation, martial arts and nutrition and has been vegetarian since 1987.

His healing career began when he graduated with his standard Government Accredited Diploma of Remedial Massage in Australia in 1991. Brandon continued his studies with massage therapy much further, completing his Diploma of Shiatsu Therapy in 1992 in Sydney, and studying both Chinese and Ayurvedic medicine in the mid 1990’s. He later completed training in Thai massage in Arizona, as well as had a lot of experience with various forms of deep tissue massage in Australia. 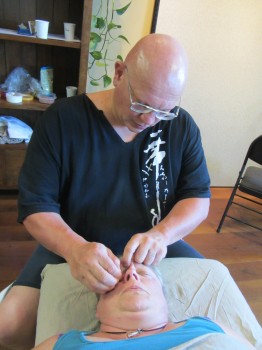 Raynor Naturopathic Massage is a reflection of his studies of different massage styles and holistic healing methods during his extensive travels around the world. By travelling the world and experiencing massage styles wherever he went, and with the help of his other studies in natural medicine, he has developed a very effective, powerful and holistic method of massage therapy which has come to be known as Raynor massage. He has been teaching Raynor massage in various forms since 1997 and has now taught over 300 courses worldwide. He is a very experienced teacher as well as an extremely powerful and effective therapist. He is married with three children.

He now teaches his Raynor Massage in an Online Massage Course.